Germany's Nahe, too, has natural wine. Piri Naturel is young grower and vintner Christine Pieroth's indepedent  line of wines,  an outgrowth of her family's winery in Burg Layen. She is introducing her own style and a breath of fresh air to Nahe’s wine scene with her small portfolio of natural wines, which tend to the rustic and straightforward, but are not shy on freshness or structure.

The Pieroth family winery, which dates to 1781, is located in the Trollbachtal, an area characterized by its ruddy-brown cliff formations – remnants of prehistoric volcanism – and comparatively warm, dry microclimate. The Nahe region is sheltered to the north and northwest by two sets of low mountain ranges, the Hunsrück and the Taunus, which protect vineyards here from frost damage that might be expected given the area’s northerly latitude.

The wide range and quality of the soils — no other place in Germany boasts such a diversity of soils in such tight array — as well as the favorable geographic location give rise to highly mineral, elegant wines. With Riesling, as well as Pinot varieties, Dornfelder, and Silvaner, planted on all the Pieroth sites, this spectrum of slate, gravel, and loam is readily perceptible in the flavors and characteristics of the wines. Among the family’s 14 hectares are some of the Nahe’s most celebrated steep slope sites, including Goldloch, Pittermännchen, and Burgberg, grand cru vineyards also tended by a very famous neighbor.

Christine trained as a vintner, then studied viticulture at Geisenheim before going on to gather practical experiences at many estates at home and abroad. She became conversant with organic farming during a year and a half spent on Canada’s Vancouver Island. Now she wants not only to improve her farming, but also to fold this into the big picture – cultivating her own vegetables and honey to offer at the Straußwirtschaft (a traditional seasonal wine tavern) attached to her parents’ winery.

The garden serves as a wellspring of inspiration for Christine — including the illustrations of flora she creates for Piri’s labels. She collects plants, paints them, then creates prints that are later digitized, as an expression of her respect for nature and the role of biodiversity in the vineyard.

As a natural wine pioneer of the Nahe, Christine does occasionally miss having nearby opportunities for direct exchange. She does now have company at the other end of the Nahe, in the village of Mandel, where Pauline Baumberger has started Glow Glow Wines. Christine follows what’s happening in Franken and Rheinhessen, and has close ties with colleagues in the Mosel: Jasmin Swan of Katla Wines, who makes her negoce wines in part from grapes grown by Christine, and Jan Klein of Staffelter Hof. Despite the distance, she says, what counts is the openness and exchange of experiences.

The Piri wines are fermented with wild vineyard yeasts  and are given sufficient time to rest on their lees: “In this way, individual and long-lived wines of character can develop and tell their own stories each vintage,” Christine explains. When asked which wine in her portfolio a newcomer to natural wine might start with, she suggests her Weißburgunder 2019: “It’s young, fresh, and bone dry, with pleasing grip from contact with the skins and stems, bracing, with a fine acidity. It’s meant to spur conversations, and with its lightness, maybe even some dancing!”

How decisive is terroir for Christine and her wine style? This question brings up the name “Ponderosa.” This is not only the name of her cuvée of Grau- and Spätburgunder (aka Pinot Gris and Noir), a rosé, but also the name of a group of family-owned vineyards. “Teasing out the ‘schmeckbare Heimat’ [tastable homeland] of our wines extends to the creation of my Ponderosa: The wine comes from neighboring vineyards all planted to different varieties. They used to be bottled monovarietally. But for me, they belong together — both in terms of taste and emotion. As long as I can remember, we’ve called these vineyards by the name Ponderosa. I’m now following this path and finally bringing everything together in the bottle.”

Tasting through the wines, I found the Ponderosa beguiling. The vines here are rooted in slate, the grapes are hand harvested, semi-carbonically fermented, then gently pressed. Fermentation is completed in oak casks and the wine remains on the full lees until bottling. Though I don’t have a full read on this natural rosé yet, I am certain this is the start of a true friendship. Try pairing it with something light, to allow the fine flavors and aromas to shine on their own.

I was immediately struck by Piri’s pét-nat of Dornfelder. The aromas and flavors suggest fruits of the forest, and beyond the sparkling enjoyment, there is persuasive depth and elegance. Whether sipped with salty manchego or a sweet bite remains up to individual taste.

The grapes for the Piri Naturel Silvaner come from 60-year-old vines grown on slate and loess. The hand-harvested berries spend six weeks on the skins, half with the stems, ferment spontaneously, and remain on the full lees in cask until spring. The wine is of a different caliber, with powerful grip – friends of skin fermentation will get their money’s worth and should find this extremely enjoyable. This would easily pair with a hearty dish.

Christine enjoys putting new ideas into action, tries to effect change through positive energy and to inspire others, but of course there are days when she questions everything: “We’ve worked a whole year, then the wine spends another year in the cellar before release and contributes to my family’s income,” she notes, “That is a lot of responsibility. But I don’t approach decisions with fear, that wouldn’t be good.”

"It’s meant to spur conversations, and with its lightness, maybe even some dancing!"

Long term, she would like to convert her family’s entire estate to organic cultivation. The first important steps, such as doing away with herbicides and converting how the estate works the  soils in all its vineyards, were taken three years ago. Heartening results are already visible: “chirping, peeping, and buzzing have returned to the vineyards,” she says. Last year a family of pheasants even nested there. While she weighs the options for certification, this spring Christine plans to introduce compost teas, working with plant extracts and other biodynamic preparations.

“Do the vineyards speak to you or do you speak to them?” I asked Christine. I’ve heard from various young growers that the relationship between grower and vine can be intimate. “You might laugh,” she replies, “but I frequently talk, or sing, or whistle to our vines. We harvest the fruits of vines that, for the most part, were planted by my father, in part even by my grandfather, and we’ve known many of the vineyards our entire lives and have spent a lot of time together. In just the same way the vineyards communicate with us, but without words; there is much to observe and learn.”

That applies particularly to pruning time, Christine says. Down in the cellar, the fresh juice and berries ferment on the skins, while outside a wonderful stillness prevails. “The vines look like little figures. Some dance, some bend acrobatically, while others stoically await the snow. You find yourself joining their rhythm while pruning, and I’m often deep in thought. It’s the time of meditative work.”

When I ask whether there’s a larger project compelling her, she answers enthusiastically. “Oh yes! Permaculture and self-sufficiency, agriculture and its position within society, regional circular economies and generally the rural region where we live. Our culture and the way in which it is embedded in the landscape. Culture happens in everyday life: It’s right outside our doors! We’re shaped by it. But we can and should also help shape it. It’s a process, a development, that we’re all invited to take part in.” Christine says she’d like to configure the estate as a place for cultural encounters: “To create time and space so that they can unfold playfully, with enthusiasm. And for that, a good bottle of wine definitely belongs on the table.” 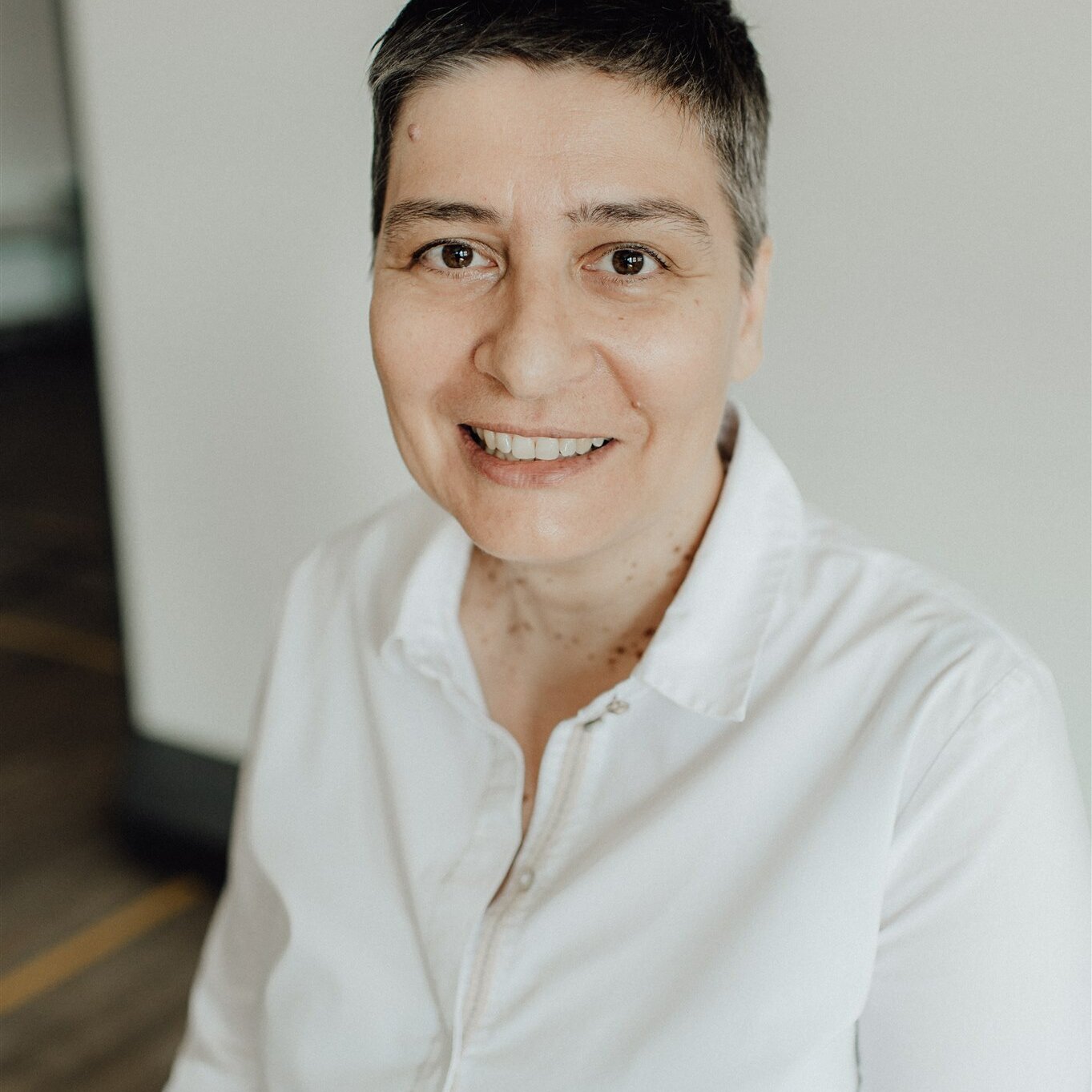