Banned and beloved, feared and revered, one would assume the birth story of absinthe to be as spirited as its character. Yet its quite conventional beginnings can be clearly traced back to the mild-mannered region of Val-de-Travers, Switzerland, below the limestone-cliffed Jura mountains, where a greenish-gray perennial that gave the herbal elixir its name thrives on the lush borders of the region’s forests and roadsides.

And so it is that neither the what nor the where, but rather the who of absinthe’s beginnings that has been called into question, becoming only the first in a long twisted tale of controversy and appearances that continues to plague the “green fairy” even today.

In 1769, a newspaper from the western, French-speaking Swiss Canton of Neuchâtel published the first known advertisement for absinthe, listing it as an extract. According to Swiss absinthe producer Kübler, that same year Madame Henriette Henriod brewed a special liquor in Val de Travers, mixing together botanicals including wormwood as a type of medicine. Native to Europe, Northern Africa and parts of Asia, wormwood (a.k.a. Artemisia absinthium) has for thousands of years been believed to have medicinal properties and been used for indigestion, reducing fevers, fighting malaria and even eradicating intestinal worms (hence its name). Some accounts, such as an 1896 catalog by French absinthe producer Pernod-Fils referenced by the US-based Wormwood Society, credit Frenchman Dr. Pierre Ordinaire, living in exile in the area in the 1790s, with creating absinthe as a remedy for various ailments.

However, others including the Wormwood Society itself and absinthe historian David Nathon-Maister, believe the story of Ordinaire is exaggerated. If there is any truth to it, Ordinaire likely took a product that was already being produced in the region decades prior and ran with it. Locals in the region think he received the recipe, perhaps even stole it, from the Henriod family. Eventually, it’s said the recipe was obtained (Kübler says “wormed” - I’m sensing some resentment) from a Henriod sister by Daniel Henri Dubied and his son-in-law Henri-Louis Pernod, who then founded an absinthe distillery in 1797 in Val-de-Travers before  moving it to France to become the absinthe brand, Pernod.

Kübler is a product of the melting pot of Switzerland’s numerous cultures and languages as well as its diverse terroir.

Decades later, absinthe would begin its rising crescendo into the "it" beverage across Europe and the New World, especially among artists, writers and bohemians. Its rise in popularity is attributed in large part to skyrocketing prices of wine during the Phylloxera epidemic of the mid-1800s, which decimated vineyards across Europe. Absinthe was happy to fill the void. In the late 1800s, the wine industry, along with the temperance movement, was partly behind the demonization of absinthe, as wine producers wanted their market share back while teetotalers used it as a convenient scapegoat for the ills of society. At the turn of the 20th century, countries across Europe began to prohibit absinthe and by 1915 the ban had hit the US and other parts of the world, lasting until the turn of the 21st century.

Absinthe's prohibition was, however, based more on hearsay and misguided science than fact. While thujone, a psychoactive substance that earned absinthe its reputation as a hallucinogen, is indeed present in grand wormwood, the levels are harmless. By the time distillation is complete, the amount of thujone remaining in absinthe is both minimal and, nowadays, highly regulated (less than 35 milligrams per liter in the EU and 10 milligrams per liter in the US). Nevertheless, thujone became vilified in the same way sulfites have stigmatized wine (no, they are not responsible for your headaches, and levels are much greater in dried fruit). Thujone is also present in herbs like oregano and mint, and — at possibly even higher concentrations than wormwood — in sage. 19th century stories of madness and visions were likely due to abusive consumption of the high-proof spirit and poisonous imitations. At its height from the 1870s-1910s, cheap, often undistilled knockoff versions appeared on the market, many incorporating non-potable industrial alcohol and toxic additives like copper sulfate (turning it artificially green), substances which can cause blindness and organ and nervous system failure.

Genuine absinthe is distilled by macerating grand wormwood, along with other botanicals, typically green anise and fennel (the three together make up the “holy trinity” of absinthe), in a neutral spirit, which is then redistilled to produce a clear liquid. Left in this state, it is referred to as Bleue (aka Blanche), a Swiss style of absinthe that owes its name to the bluish-gray hue it adopts when diluted with water. The emerald-hued, and perhaps more popular version of absinthe called Verte, appears when the absinthe goes through a second stage of maceration in which botanicals, such as wormwood, hyssop and lemon balm, are soaked in the clear distillate. Not only does this add to the flavor profile, it also releases chlorophyll from the herbs, transmuting the liquid into the notorious “green fairy.”

A few years ago I came upon a bottle of Kübler Absinthe. Looking at the name, I assumed it was made in the German-speaking region of Switzerland, but was intrigued to find out it too comes from Val-de-Travers. How does a distillery over 150 years old with a German name find itself in the French realm of Switzerland? What I learned is that Kübler is a product of the melting pot of Switzerland’s numerous cultures and languages as well as its diverse terroir, and carries forth the traditional preparation of a spirit born in the country that took over the world and in many ways remains misunderstood.

To learn more about Kübler’s history, I reached out to its Master Distiller Yves Kübler, the great-grandson of founder Jacob Frederic Kübler. He explained that J.F. Kübler, born in Baden in 1830, was a pharmacist who later migrated to Switzerland, likely drawn by better economic conditions. Yves couldn’t say if J.F. Kübler chose to distill absinthe because he was a pharmacist, but one thread binds the profession to the spirit to its origin in Val-de-Travers: wormwood.

Many aperitifs are fortified with herbs and botanicals, with blooming, wine-like flavors punctuated by bitterness...

Kübler’s original 1863 formula produces the Swiss Bleue style of absinthe and is carried on four generations later by Yves Kübler. In addition to the “holy trinity,” incorporating local grand wormwood, its other regionally sourced ingredients include petite wormwood, hyssop, mint, and lemon balm. “The recipe,” according to Kübler, “is about balance, highlighting the character of all the locally sourced botanicals, not just wormwood.” The ingredients, including coriander and anise, are macerated in a neutral grain spirit made from Swiss wheat sourced from the Seeland region in the Canton of Bern. The spirit is then blended with Alpine spring water to bring it to its desired ABV. The water is filtered through reverse osmosis to remove particulates, leaving behind a refined mineral content, which Kübler says “lends a softness to the spirit.”

Yet, for many the bottle is simply the beginning, not the end, of the absinthe journey. Given its high level of alcohol and intense flavor, absinthe was never intended to be drunk neat. In 18th century Val-de-Travers, water and a spoonful of sugar dampened the bitterness and alcoholic burn. Later, a more sophisticated ritual of preparation emerged in the form of the absinthe fountain, which slowly drips water over a sugar cube placed on a slotted absinthe spoon into a glass with about one ounce of absinthe. Once diluted (1 part absinthe to 3-5 parts water is typical), any remaining sugar is stirred in. The process turns the drink opaque (aka La Louche) as oils in the absinthe emulsify, while also blooming the flavors. While the fountain is theatrical, the same result can be achieved by slowly pouring cold water over a sugar cube placed on an absinthe spoon, or a well-balanced fork.

A 1-to-5 diluted Kübler has a silky mouthfeel. The anise is predominant, but it’s not as piercing as black licorice. It offers a vegetal quality akin to fresh-cut fennel. A nuanced minty backdrop and a fleeting bitterness from the wormwood emerge in time. The sugar provides a balanced sweetness resulting in a clean and refreshing finish. At 53%, Kübler is on the lower ABV spectrum of absinthes, making for a delicate and restrained spirit.

Historically absinthe was consumed as an aperitif. Vermouths, amaros, sherry, and liqueurs such as Campari are examples of traditional aperitifs — generally slow-sippers. Like absinthe, many are fortified with herbs and botanicals, with blooming, wine-like flavor profiles punctuated by a bitterness that taps the brakes to savor each taste. In bygone times an aperitif was customarily enjoyed to slow things down, encourage connection and conversation and stimulate the palate as the dinner hour neared.

During the pandemic as we sheltered in place, this take on the aperitif assumed a deeper meaning for me. I’ve found that simply pouring a glass of wine or cracking open a beer while doom-scrolling on my phone is no longer cutting it. I’ve recognized the importance of daily rituals that institute a legitimate pause to shift one’s focus from the daily routine to something creative and fulfilling that engages as many senses as possible. The selection of glassware, the putting out of small bites, the sound of a cocktail shaker or the pop of a cork, along with some choice music. These small acts can be a sensory bell to put devices away and enjoy the moment and one another.

In the cocktail world absinthe is most often used to bring in a unique secondary layer of complexity. The Corpse Reviver (#2), the Sazerac, Death in the Afternoon, and the Cocktail à la Louisiane are a few amazing classics which incorporate absinthe. But if you’re going to invest in a premium bottle like Kübler, I recommend putting it front and center.

For those able to host safe, outdoor and socially distanced gatherings, a contactless punch that can be ladled into a glass is a wonderful shared experience. And there is nothing simpler than the Green Beast to put your Kübler to work and can be a great gateway cocktail for those on the fence about absinthe.

Combine the absinthe, lime juice, simple syrup and water in a large bowl. Add ice and stir well to chill it down. Garnish with cucumber.

The brightness of lime marries the absinthe in a light and refreshing cocktail marbled with vegetal notes.

As we shift into hotter months, the Absinthe Frappe is about as refreshing as it gets.

Add the syrup and 2-3 mint leaves to a cocktail shaker. Muddle the mint by gently pressing it 2-3 times with a muddler or handle of a wooden spoon to release its oils. Add the absinthe, water and ice. Shake for about 10 seconds and strain into a glass full of crushed ice. Garnish with a mint sprig.

This über-icy cocktail from the late 1800s was historically drunk as a morning pick-me-up, but is an incredible afternoon cooler when the sun is heavy on your back, with a bright mintiness and slushy ice blooming the flavors. 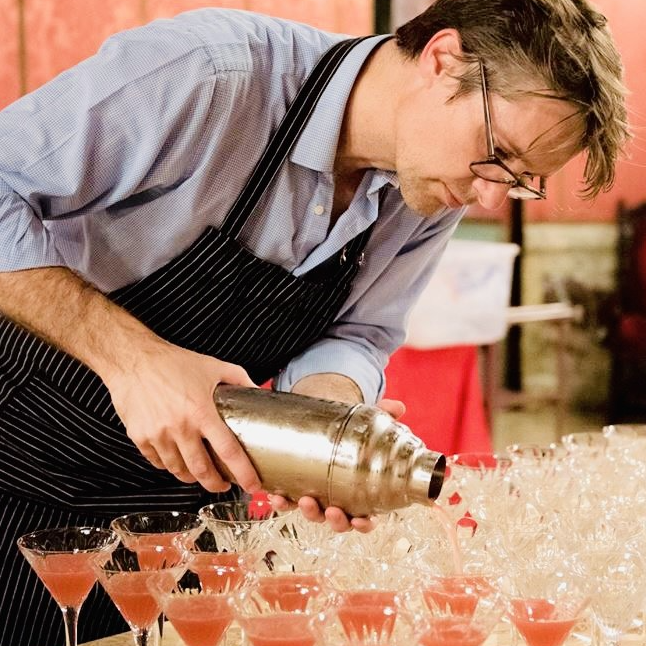