Once and Future St. Laurent

Once and Future St. Laurent

St. Lawrence, the man, was born in Valencia, Spain, sometime around 225 CE. He moved to Rome to work with Pope Sixtus II, became a deacon, and earned a reputation as a champion of the poor. On August 10, 258, Roman Emperor Valerian sentenced him to die by being lashed to a bed of hot coals. But so great was his devotion to god, the legend goes, that he resisted the flames, demanding that his tormentors flip him like a steak. A martyr was made.

St. Laurent, the grape, is thought to have originated in what is now eastern Austria sometime after 1240 CE. Cistercian monks who’d settled there from Burgundy brought along their Pinot vines, both noir and gris. Vines are notoriously promiscuous, so while better suited to the cold, calcareous terroir of their homeland than the warmer and drier Danube plain, they evolved, coaxed and crossed into new, adapted forms. One, more tolerant of heat, inherited the dark color, flimsy skin, and proclivity to rot of its swarthy French progenitor. The fruit made an earthy red wine with flavors of cherries wreathed in greenery. Its clusters entered veraison around August 10, the Christian feast day of Saint Lawrence (who was, apparently, also tolerant of heat). The new variety was christened “Sankt Laurent.”

These stories, like all old stories and nearly every good one, mingle truth and fiction. Some parts are filigree, some parts fact. But even those seemingly verifiable elements of St. Laurent’s story have, until recently, been subject to debate.

We cannot build the future by avenging the past

Take St. Laurent’s parentage. Does Pinot really play a part? I turned first to Wine Grapes, the authoritative 1,200-page reference tome by Jancis Robinson, Julia Harding, and José Vouillamoz, published in 2012, that could double as a flower press. The entry for Sankt Laurent, on page 946, supports the narrative that the vine first arose in Austria before migrating to Germany and a handful of Eastern European countries. Under Origins and Parentage, it cites the work of Austrian grape geneticist Dr. Ferdinand Regner, who affirms the Pinot lineage. But the entry goes on to question this, citing Dr. Vouillamoz and suggesting that perhaps Dr. Regner had confused his sample with another grape, the far more obscure, and genetically unrelated, Pinot Saint-Laurent.

Wines of Austria’s website entry for Sankt Laurent declares it not only a seedling of Pinot Noir but also a synonym for Pinot Saint-Laurent. Wines of Germany tacks opposite, acknowledging that while it was once considered part of the sprawling Pinot family, it’s now thought to be distinct. On Jancisrobinson.com — Robinson is, you will recall, first author of Wine Grapes — the entry says it’s possibly a cross between Pinot Noir and Savagnin.

I asked two well-regarded Austrian winemakers. Both are Team Pinot. Walter Glatzer, who makes wine under his own label in Carnuntum, Austria, told me, “St. Laurent, we think, is a mutation from the Pinot Noir grape. The mother grape is Pinot Noir, and the father grape is unknown.”

Josef Umathum of Burgenland echoed this. “St. Laurent is a daughter of Pinot Noir,” he said. “The mother is Pinot Noir, and the father got lost — as in normal life it may happen!” When I floated to Umathum that the Pinot parentage had been called into question, he referred me to his compatriot — none other than Dr. Ferdinand Regner.

Dr. Regner currently heads the viticulture institute and grapevine breeding department at Klosterneuburg, near Vienna, and was one of the first to conduct genetic research on St. Laurent. By using contemporary techniques of gene research, scientists have compared genetic markers of Pinot Noir and St. Laurent. According to Dr. Regner, St. Laurent “shows at all investigated loci one allele in common with Pinot Noir,” he wrote, by email. Putting it more simply: “That means it has to be a parent or an offspring from Pinot Noir.”

And given that scientists know quite a bit about Pinot’s ancestry, its history, origins, and other genetics, it’s evident that St. Laurent couldn’t be Pinot’s parent — it could only be Pinot’s offspring. Dr. Regner concedes that we don’t, however, know the identity of St. Laurent’s other parent.

St. Laurent, the wine, seems to have inherited Pinot’s bone structure, but its flesh and countenance are unique.

And as for Dr. Vouillamoz’s skepticism? “I have observed that not all collections have true-to-type St. Laurent available,” Dr. Regner said. Incorrect source material would easily throw off analysis. He concluded decisively: “St. Laurent belongs to the Pinot family.”

If I were to be made a knight

It does make sense.

While chasing the grape’s ancestry on the page, I was simultaneously chasing flavors in the glass, tasting samples mostly from Austria but also from Germany’s Pfalz, where the grape plays a minor but growing role. St. Laurent, the wine, seems to have inherited Pinot’s bone structure, but its flesh and countenance are unique. The perfume mingles black cherries and black bramble fruits with a kind of leafiness, both fresh and dried herbs plus a woodsy sous bois. Its core is likewise cherry-steeped and ablaze with acidity. Texturally substantial with tannins that play the long game, it finishes with a pleasing back-palate bite. The overall effect is a substantial but refreshing red wine whose savor ties it readily to cuisine. 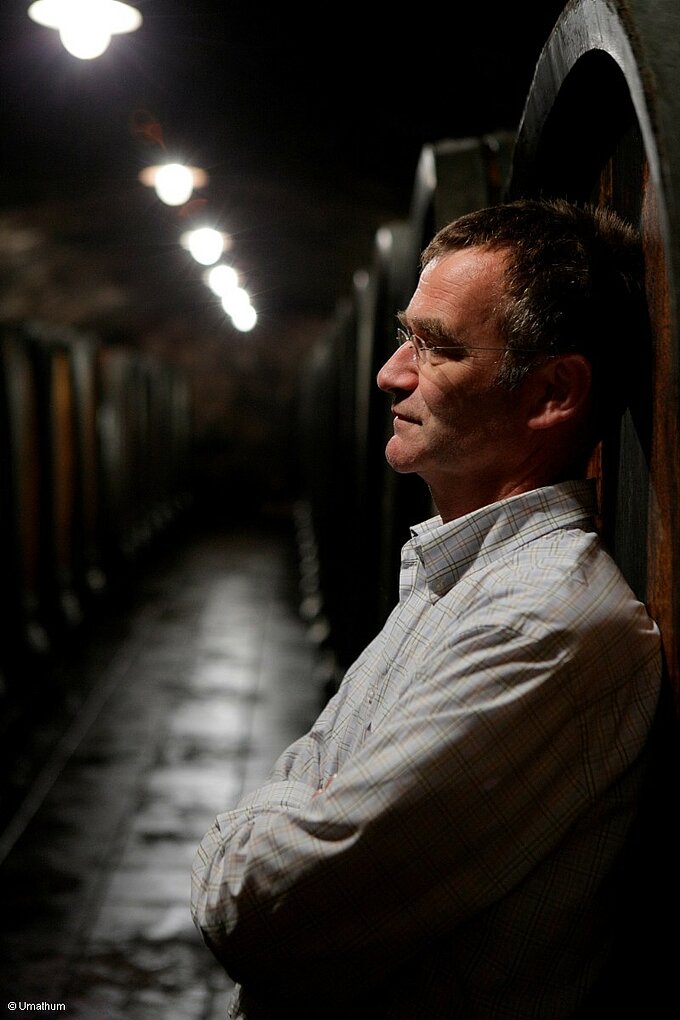 “The color is deeper than Pinot Noir, a dark red, and the smell always reminds a little of blackberries,” Umathum said. “Also, the fruit is deeper and blacker than Pinot Noir. On the palate, we find the same fruits: blackberries and cherries, and in the finish we have a freshness, always.” He agrees about the leafiness: “It sometimes reminds me of when you go to the woods in autumn, when the leaves are lying down on the earth and the smell is a little bit dark.”

The wine’s acidity and savoriness make it an exceptionally food-friendly choice. “I recommend heavy meat — deer or lamb,” said Umathum. “Everything with mushrooms, and maybe cheese, would work very well.”

Like its parent, Pinot Noir, St. Laurent is somewhat finicky to grow, partly because of its thin skin. “If you have rain during the harvest, or before harvest, you can get botrytis,” Glatzer said. Rot is an especially big threat to vineyards like his that flank Lake Neusiedl. Working biodynamically, Glatzer must apply sulfur every five days during flowering, and make multiple passes throughout the season to guard against oidium and botrytis. It’s labor intensive. “The main thing is you have to use only healthy grapes when making St. Laurent,” Glatzer said. “If you have botrytis … there is no aging potential. The color is brown, and it’s not really clear, and also the aromatics are dead. St. Laurent has zero tolerance of botrytis.”

Although equally sensitive to moisture, St. Laurent shrugs off warm spells better than Pinot Noir. Whereas heat spikes at harvest cause Pinot’s sugars to go through the roof, St. Laurent keeps its cool, attaining physiological ripeness without building abundant sugar, and retaining its acidity, too. Pinots from this region often finish at 14% alcohol, but St. Laurent routinely clocks in at a more moderate 12.5% to 13.5%.

Wait till it happens and see…

As is true everywhere, our climate emergency has growers worried. A vine’s growth timetable is more or less baked into its genetics, and St. Laurent’s runs 100 days between flowering and harvest. That entire cycle has been shifting earlier in recent decades. Flowering starts sooner, and the vines are susceptible to frosts that can cause millerandage, which limits yields. Hotter summers overall speed the ripening process, shaving a bit of time off that predicted 100 days. Harvest is sooner, too. “Compared to the 1980s, when we usually had the main harvest in the first or second week of October, now we pick three, four weeks earlier, sometimes even five weeks,” Umathum said. In response, he’s used selection massale to identify six types of St. Laurent capable of meeting the demands of a hotter climate.

All of which means St. Laurent no longer enters veraison on August 10, the date for which it’s named, but rather three weeks sooner. Scanning the Christian calendar, I find there is a second St. Lawrence, this one “of Brindisi,” a 16th century priest and scholar who, among other accomplishments, helped establish monasteries in what is now Austria and Germany.

His holy day? July 21. So the name “Sankt Laurent” can stick — at least for now.

The Drink Was Yours

Hartl’s fruit is grown on alluvial and limestone soils, and the wine is raised for a year in a mix of used barriques and stainless steel. It yields aromas of black cherry, black raspberry, and tarragon. Medium-bodied but with good acidity, it reveals an enchanting anise-basil finish.

Kalls sources grapes from the 800-year-old Kobnert Vineyard, in the Palatinate Forest, whose soils are a jumble of marl, sand, loess, clay, and gravel. Limpid red, the wine offers high-toned notes of rhubarb and cherries, licorice, and green herbs. Fruit-driven and direct, it has juicy cherry fruit and finishes with a coffee snap.

Steindorfer’s Sankt Laurent is grown on 20-year-old vines, farmed sustainably. The grapes are vinified in stainless steel and mature for 14 months in new barrique. High toned and fragrant, the wine offers aromas of sharp red fruits, brushy dried herbs, and licorice. It has medium weight on the palate, with silky tannins and opulent black fruit flavors. The finish is like espresso — delightfully bitter and refreshing.

Umathum’s Vom Stein vineyard has gravelly soils, and the farming is biodynamic. The color of this 2013 vintage has begun to shift toward tawny, and the aromas are showing tertiary character, too: a sense of leather and potpourri mingling with fresh and dried strawberries, lavender, and rosemary. The tannins are well integrated, carrying flavors of dried black cherries and allspice, yet it has a lovely and surprising wintergreen finish. This bottle shows what this grape can do.

All wines were review samples. 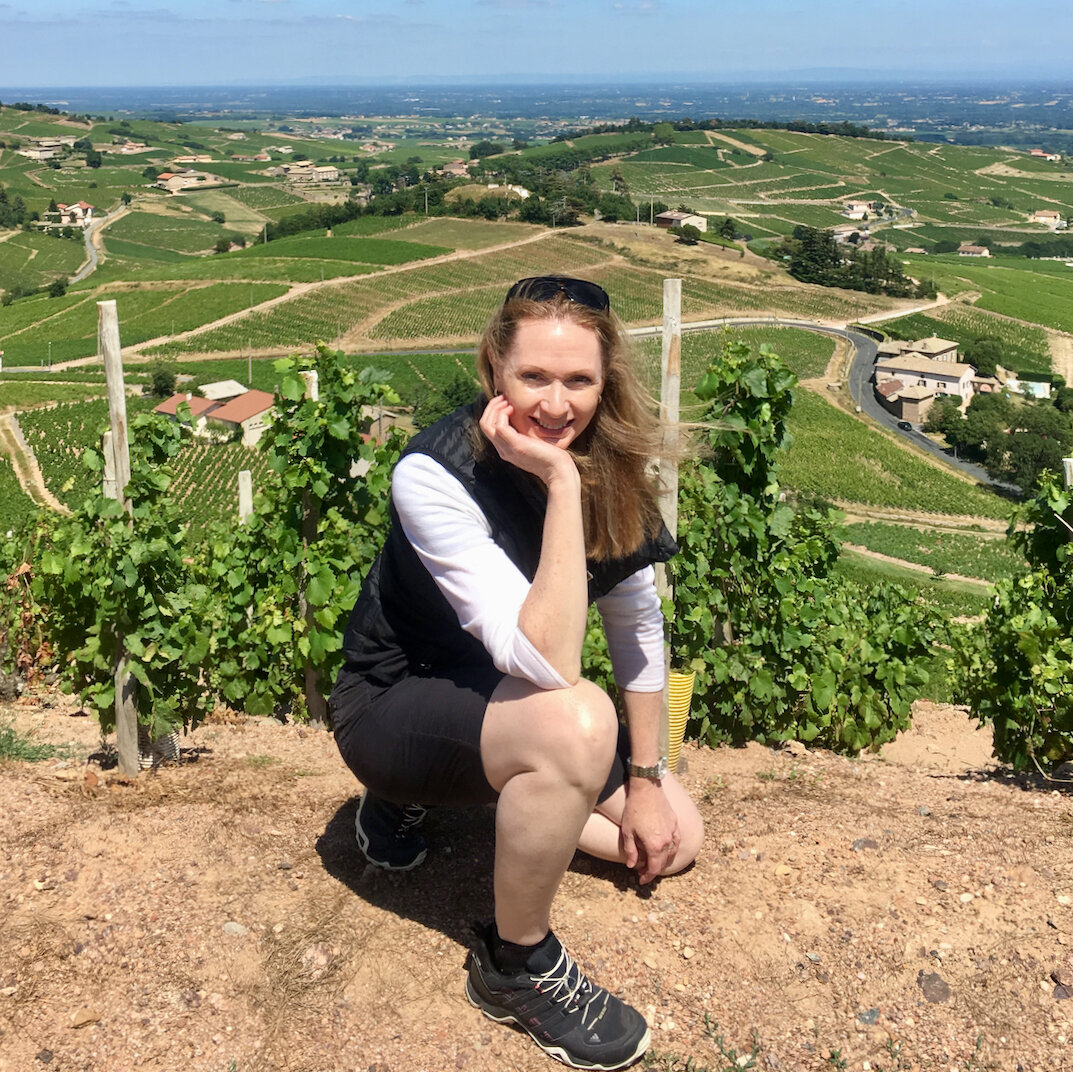